Open all / Close all
BANGKOK ARRIVAL

Arrival at Suvarnabhumi International Airport, collect your luggage process through custom. Your private tour guide from Asia Dream Tours will be waiting for you outside the arrival hall holding the signboard with your name on it then transfer you in a private vehicle to the hotel in downtown.

Arrive at your hotel then check in and relax at your own leisure in Bangkok. 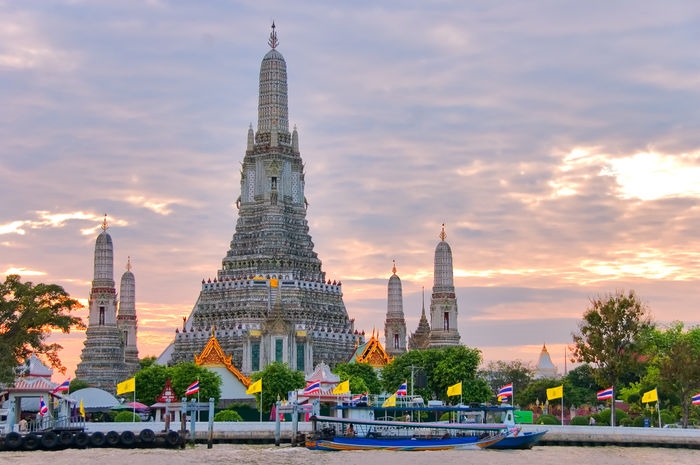 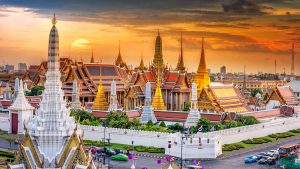 Breakfast at hotel then the tour starts with The Grand Palace, a complex of buildings at the heart of Bangkok, Thailand. The palace was once served as the residence of the Royal family and the administrative court from 1782-1925. There are great buildings, halls, pavilions and courtyards, surrounded by four walls. Inside the same compound is the Temple of the Emerald Buddha, revered as the most sacred temple and Buddha image of Thailand. You will also see marvelous interior and exterior decoration of the chapel.

Continue to Wat Pho (Temple of the Reclining Buddha), one of the largest and oldest temples in Bangkok and home to the famous reclining Buddha image of 15 meter high and 46 meter long. Wat Pho is a beautifully decor Buddhist temple complex with magnificent architectures and contains nearly a hundred stupas (or chedi), large and small as well as hundreds of typical Chinese statues of different shapes and sizes.

Experience an exhilarating long-tailed boat ride along the Chao Phraya River and visit Wat Arun – the amazing Temple of Dawn before returning to your hotel to relax. 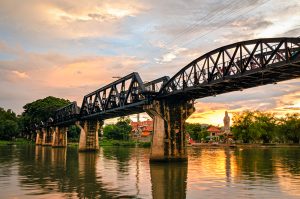 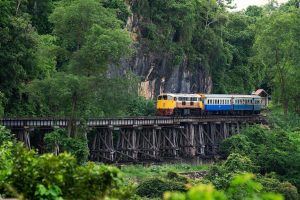 Early in the morning, meet with the guide and driver and head south from Bangkok towards Kanchanaburi with an en-route stop at Nakhon Pathom, for a visit to Woodland Muangmai Fantasy Museum. Here, enjoy the legendary “Tales of the Wood” through unique and beautiful wooden art pieces from various places. Following this, proceed to Kanchanaburi.

Upon arrival in Kanchanaburi, lunch at a local restaurant. After lunch, embark on a longtail boat and cruise around the River Kwai. Disembark at the pier in Kanchanaburi, next to the ‘Bridge over the River Kwai’. Stop for a photo opportunity of the bridge from the ground-level. Then continue for a visit to Death Railway Museum, Research Centre and War Cemetery.

Transfer to your hotel to check- in. 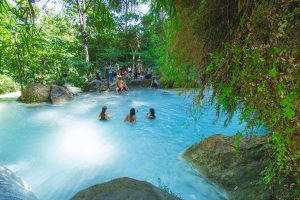 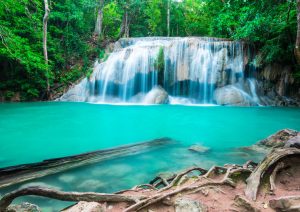 After breakfast, depart for Erawan Waterfall – a beautiful seven-tiered waterfall located in Erawan National Park. It’s possible to walk up to each tier of these picturesque falls, so be sure to bring good walking shoes. Also remember to bring a swimming suit to cool off in the falls’ natural pools. Then continue by car through the national park area to Phra That Cave – a large mountain cave filled with stunning stalactites and stalagmites.

After lunch, take a short train ride along the ‘Death Railway’ through Kwai Noi Gorge.

After the ride, transfer to back to your hotel. Free time afterwards. 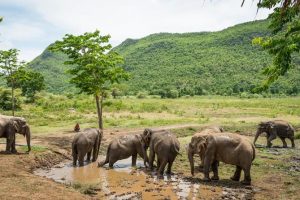 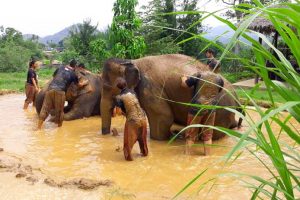 After breakfast at the hotel, start a day trip to Elephant World, located just half an hour from the famous River Kwai Bridge. Elephant World is a sanctuary for elephants with nowhere else to go. Here they can enjoy the natural jungle landscape in peace and harmony.

Following a warm welcome and introduction from the volunteers at Elephant World, it’s off to meet the elephants themselves. Be introduced to each elephant and have the opportunity to work for them under guidance from the ‘mahout’ – the local elephant handler. This includes enjoyable activities like cutting sugar cane or banana plants to feed the elephants.

After a Thai lunch at the camp, have the incredible opportunity to take a bath with the elephants in the Kwai Yai River! Help give them a good scrub, before walking the elephants back into the camp, and then on into the forest where they will spend the night.

Return to the hotel.

Breakfast at the hotel. Check out and transfer from Kanchanaburi to Bangkok Airport for flight to Chiang Rai. Upon arrival in Chiang Rai, getting picked up by our driver in Chiang Rai, you will then head to your hotel.

After breakfast in the morning, get picked up at the hotel in Chiang Rai and head to Sop Ruak to see the viewpoint of the Golden Triangle where the Mekong River joins Laos, Myanmar and Thailand. Visit the Hall of Opium (closed on Monday), an impressive and informative museum that documents the history of the area and details its links to the opium trade.

Lunch at a local restaurant.

This afternoon we will visit Wat Rong Khun, also known as the White Temple. Soak up the amazing beauty of the unique kanok architecture. Then transfer to your hotel to relax.

After breakfast, transfer from Chiang Rai to Chiang Mai stopping at Pha Soet Hot Spring to relax. Upon arrival, check in to the hotel, head out for some independent exploration or relax at the hotel.

Finish the tour and transfer back to your hotel to relax. 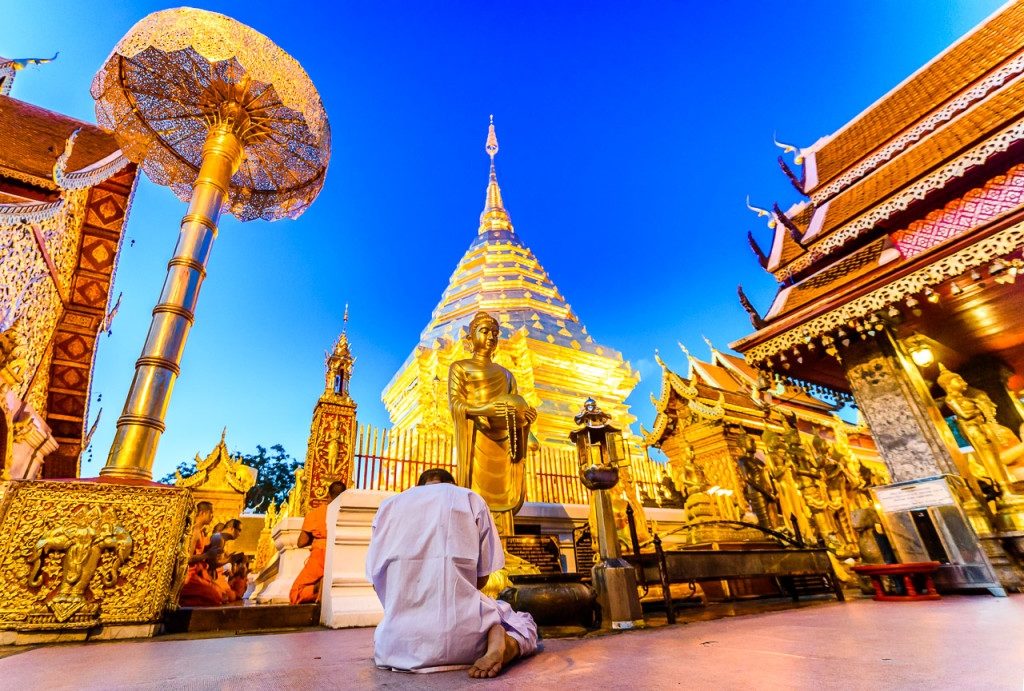 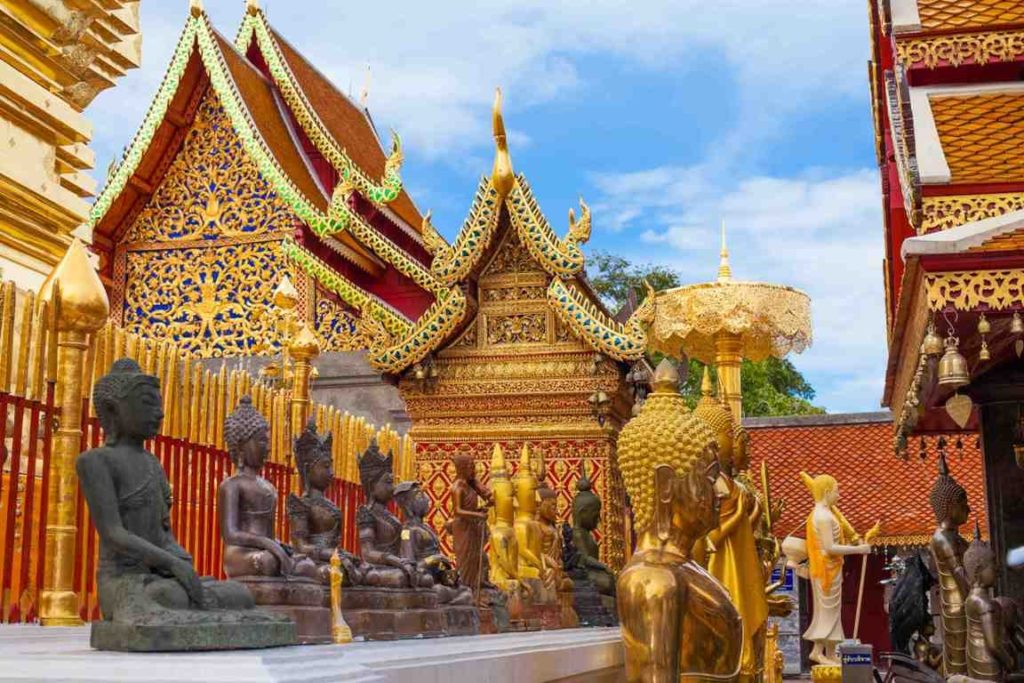 After breakfast drive around the Old City to see city’s moat and ruined walls. Start the temples tour with Wat Chiang Man, the oldest temple which probably dates from 1296. The temple was the residence of King Mengrai, who founded Chiang Mai, and is noteworthy for a chedi supported by rows of elephantine buttresses.

Visit Wat Phra Singh, which was built in the year 1345. This temple contains marvelous examples of Lanna art including a Lanna style viharn and the finest scripture repository of its type in the north.Proceed to Wat Suan Dok, which means field of flowers. This temple is one of the first temples with a large viharn, or prayer hall. This chapel is unusual not only for its size, but also the fact that it is open on the sides rather than being totally enclosed.

After lunch at local restaurant we will visitWat Phrathat Doi Suthep, which was built in 1383, located 15 km from the city and 3,500 feet above sea level. See the marvelous golden pagoda, which contains the holy relics of Lord Buddha.

Enjoy the panoramic view of Chiang Mai City and Ping valley from the summit of Doi Suthep. Wat Phrathat Doi Suthep can be approached on foot by climbing 306 steep stairs, flanked by tremendous mythical Nagas, which symbolizes humanity’s progress from earth to nirvana.

Finish the tour and transfer back to your hotel to relax.

Today is an exciting trip on the sea, through various islands and enchanting sites. In the morning, board on speedboat at Marina for Phi Phi Island trip to visit or sightseeing Monkey Beach, Viking Cave, Pileh Cove and LohSamah Bay. Then come to Maya Bay to experience its unique lagoon with azure crystal water. Later, you can relax or snorkel at Bamboo Island or Khai Island before coming back to Phuket for dinner and night stay. 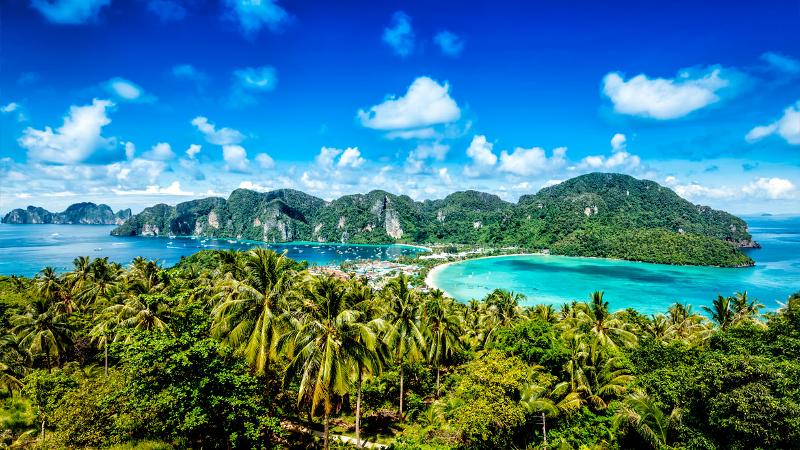 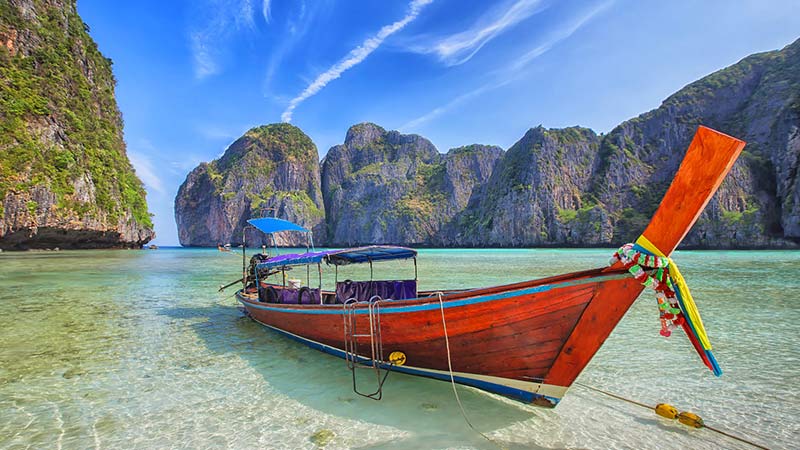 Free day to relax on the beach. 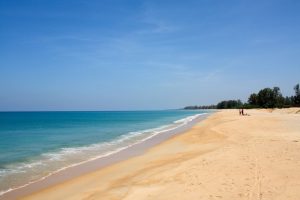 The day is for you to explore Phuket on your own will.

Farewell to Thailand as you depart from Phuket to Bangkok for your flight home.

What you are reading here is just a sample itinerary. Your interest decides how your trip will look like. All of our tour is private so you can always adjust any details until it matches your wish... 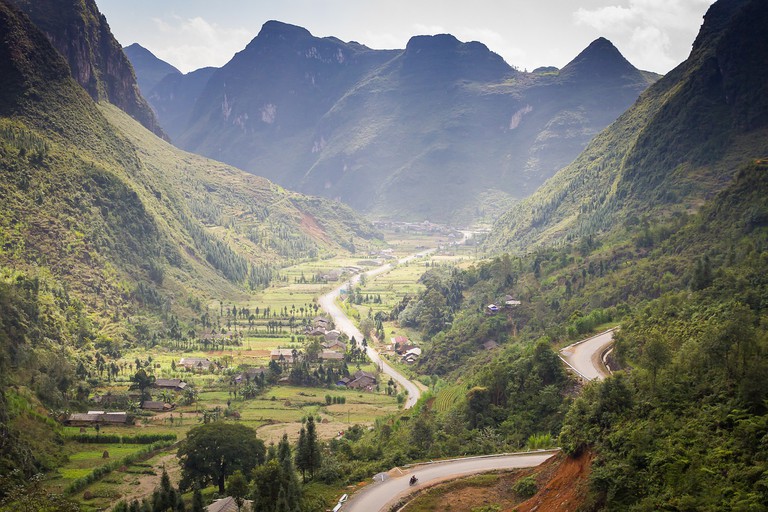 This tour is designed for all-time. During the peak season, namely late September to next March, great weather brings out the best colors of Thailand. Although it can be a bit hotter and rainier during summer time, namely April to September, trekking in Khao Yai National Park gets you better chances to see wildlife. Typhoon hits the coast during July to October, which sometimes might compromise your experience in Phuket. However, everything can be tailor-made, remember? If your plan doesn’t fall in the “best time to Thailand”, our travel consultants can still make it possible by adjusting activities, destinations and etc. Specify your travel time and let us work the magic. 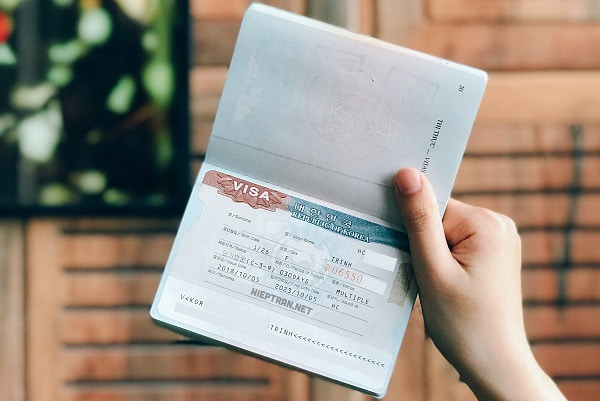 Thailand currently offers visa-free travel to nationals of 57 countries and territories. The Thai government maintains bilateral agreements on visa waivers with some countries. Nationals of 21 countries can obtain a visa on arrival. Please kindly contact our travel consultant to get the information of your visa to Thailand. 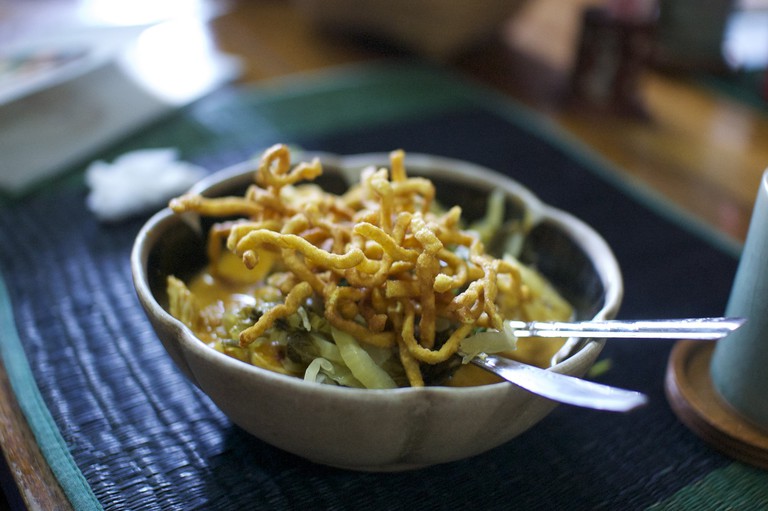 Daily breakfast at hotels and a lunch for days with sightseeing are included, so are some dinners as mentioned in the itinerary. For meals that are not included, your tour guides will be happy to offer suggestions. If you have any special dietary requirements, please let us know when making your inquiry. We will do our best to accommodation and we appreciate your understanding at some places that are not within our control. 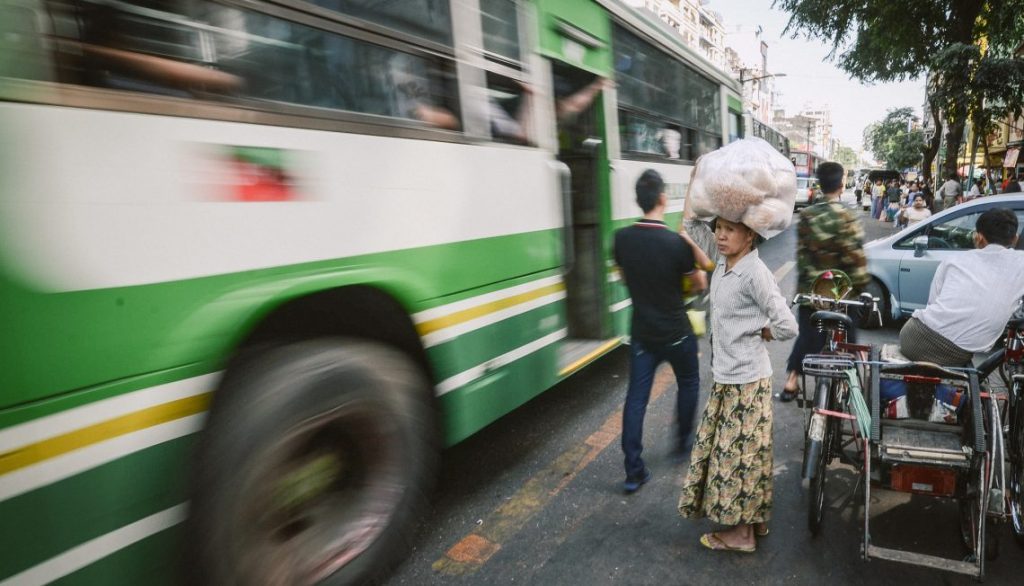 You will have a private car in each destination; our cars are within 5 years of usage and your private drivers will be polite and drive with strong regard for safety. All of vehicles are in good maintenance and with A/C. 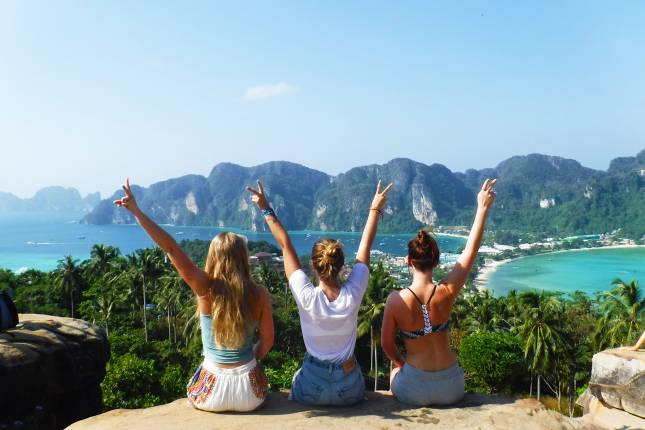 Sightseeing, activities and accommodations that are mentioned in this tour you are looking at are just for your inspiration. Thailand has many wonderful sights worth visiting, from stunning tropical beaches, various national parks, striking Buddhist wats, and magnificent ancient ruins, to the exuberant capital city. We can offer you advice about choosing activities and finding accommodation, to help you shape your own ideas of your trip. We encourage you to talk with our travel consultants and set your own pace. 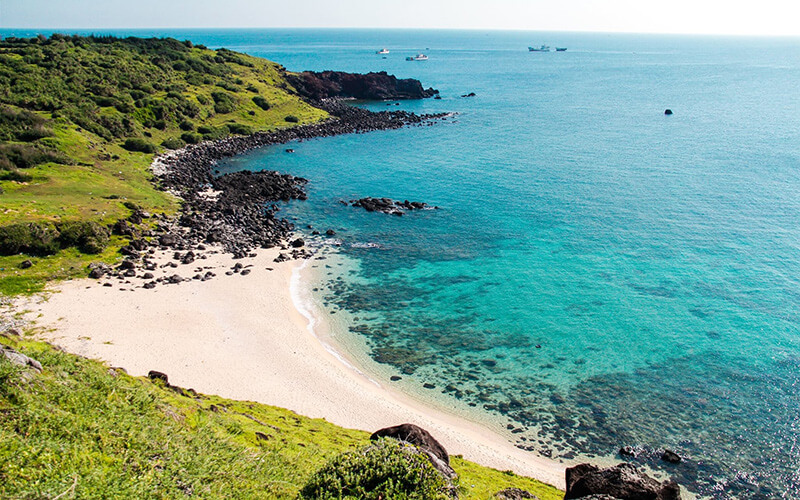 Travel avails you with special experiences. Somehow its impact on the local community can be more beyond imagination and what Asia Dream Tours wishes to do is lead the impact onto a good path, a path that helps the local people (not only your tour guides) broaden their outlook and the local communities develop. During your trip, you will eat at a training restaurant where underprivileged youngsters get trained as a chef, ride on local cyclo to reduce your carbon footprints and most commonly learn about the country’s cultures with respect. Taking baby steps one at a time, we highly appreciate you would like to be part of it. With that being said, detours to so-called factories or specialty workshops are strictly prohibited. We make sure your tour guides earn enough to support their families without squeezing commissions out of you.

Other tours we Recommend