For a Myanmar opening to the outside world, tourists can possibly discover a cuisine that is largely hidden from the world for the last 50 years. By focusing mostly rich salty/savory flavors, influences in Southern and Southeast Asia countries and a list of ingredients that are not found in any other cuisine, there is much to discover. Here are completely delicious dishes in Myanmar for visitors and travelers in Myanmar: 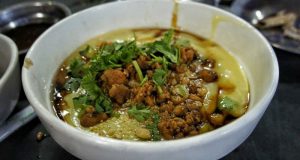 One of the most famous dishes in Myanmar is hto-hpu-nwe, it is also known as “warm tofu”. It is one of the popular dishes of ethnic Sha in Myanmar. The dish does not really include tofu, but rather a thick porridge made from chickpea flour.
The sticky yellow material is served in thin rice noodles, chunks of marinated pork or chicken. It is covered with a layer of chili oil and includes parts of pickled vegetables and broth. It’s a strange combination and visually stunning, but if you are a fan of savory flavors, one that will grow on you. 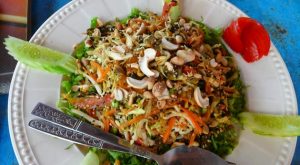 The tart leaves are eaten on their own, typically as dessert, but they’re also served in the form of lephet thoke, a salad of pickled tea leaves. To make the dish, the sour, slightly bitter leaves are mixed by hand with shredded cabbage, sliced tomatoes, crunchy deep-fried beans, nuts and peas, a splash of garlic oil and pungent slices of chili and garlic.
The dish is versatile. It can be a snack, an appetizer or, coupled with a plate of rice, a meal. It’s also considered a stimulant: the Burmese says that eating too much lephet thoke can prevent sleep. 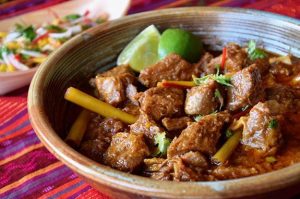 A visit to a traditional Burmese restaurant is more than just a meal, it’s a culinary experience.
As the name suggests, curry is the central element, but after you’ve chosen one – typically a meaty, somewhat oily curry based around pork, fish, shrimp, beef or mutton – a seemingly never-ending succession of side dishes will follow. These include rice, a tart salad, a small dish of fried vegetables, a small bowl of soup and a large tray of fresh and par-boiled vegetables and herbs to be eaten with various dips. 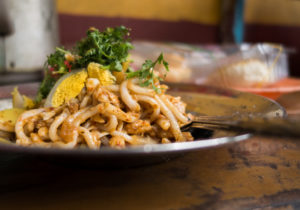 One of the most delicious and tastiest dishes is “dry” noodles dishes which combine broth and salad served on the side with noodles and most popular is nangyi thoke.
The dish takes the form of thick round rice noodles with chicken, thin slices of fish cake, boiled bean sprouts and slices of hard-boiled eggs.
The ingredients are seasoned with a mixture of roasted chickpeas flour and turmeric and chili oil, thrown by hand and served with sides of garnish and a bowl of broth. 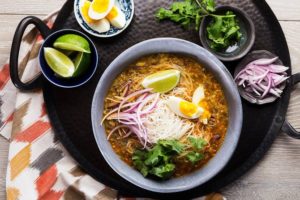 Mohinga is an unofficial national dish of Myanmar. It is fine rice noodles served in herbal fishing and hearty shallot-based broth, often supplemented by a crunchy pitch of banana.
It is loved as a breakfast dish but sold by street vendors, it is a popular snack at any time of day or night.
Optional toppings include sliced hard-boiled egg and akyaw, crispy fried vegetables and or hard-paste lenses. The dish is seasoned to taste with lemon juice and or dried chili flakes. 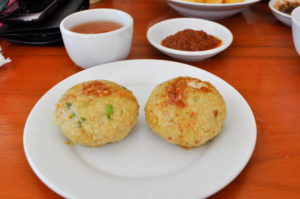 Known in Burmese as nga htamin (fish rice), this Shan (one of the country’s main Buddhist ethnic groups) dish combines rice that’s been cooked with turmeric and squashed into a disk with a topping of flakes of freshwater fish and garlic oil.
Oily and savory, when served with sides of leek roots, cloves of raw garlic and deep-fried pork rinds, nga htamin becomes a snack that runs the gamut from pungent to spicy. 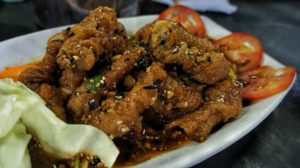 Often underrated and under-appreciated, chicken feet is actually quite delicious. Other than preparing it our usual yum cha way, Burmese douse it in a homemade sauce.
It is the sauce that makes this chicken feet salad a delicacy in its own right with its intense flavour, thanks to a mix of soy sauce, lemon, vinegar and brown sugar giving it a sweet edge and crunchy bits of roasted sesame. Sweet and savoury, juicy and tender, this is how this salad dish tastes like. Very appetizing! 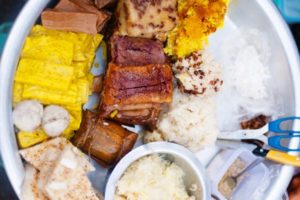 In contrast, generally known as “muon”, sweet West Burma dish is not eaten as dessert but as appetizers, supposed to be taken with tea in the morning or afternoon. And unlike candy in Southeast Asia elsewhere, Moun are not usually full of sugar, instead of getting its sweet ingredients like coconut, coconut milk, rice flour taste cooked glutinous rice, tapioca and fruit.
Burmese sweets that include hsa nwin, crispy-semolina flour biscuits with coconut milk, butter and raisins; and moun bein and moun pyit thalet, Burmese-style crepes, served sweet or savory, with a consistency hole and not unlike a wet crepe English.

Essentially a claypot noodle in Myanmar, it is a popular Chinese-inspired dish that can be found along the streets of Chinatown. The noodle is served in a bubbling savoury broth topped with slices of soft-braised pork belly or shreds of beef, and three different types of vegetables for good measure. 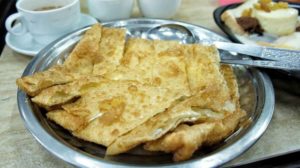