Cooking in Thailand is an art form, a process that invigorates each of the five senses, creating dishes that are as exciting and stimulating as they are delicious. Yet Thai cuisine is too vast and varied to be labelled simply “Thai”; each region has its own specialties, steeped in tradition and passed down from generation to generation. Starting from the top, we’ll work through this enchanting land, and discover a trove of culinary treats along the way.

Northern Thailand
Long before it was a part of Thailand, Northern Thailand was a separate kingdom known as Lanna Kingdom. Its elephants and temples may be seen as quintessentially Thai now, but its food differs from what one may consider traditional Thai food. The mountainous highlands and cooler temperatures make it an ideal place to grow aromatic herbs, which feature heavily in Lanna cuisine.

Sai Oua
Sai oua is a Northern Thai speciality. Different to many sausages you may have tried, sai oua combines fatty pork with kaffir lime, coriander, lemongrass, chilli and galangal to produce a fragrant, fiery sausage that’ll rival any around the world. Despite its status as a northern Thai food, today it’s enjoyed all around the country. 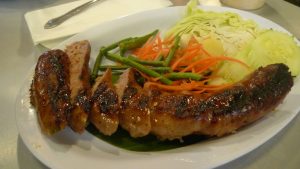 Khao Soi
A hearty coconut curry soup, soft noodles are eaten alongside crispy egg noodles in a deliciously rich coconut-laden sauce. Popular with both meat and vegetables inside, it’s not too spicy despite its red colour and is found all over northern Thailand and beyond. Perfect for those who want to try a curry but are worried about the spice levels in Thailand, with the aromatic curry and crunchy noodles providing satisfaction with every bite. 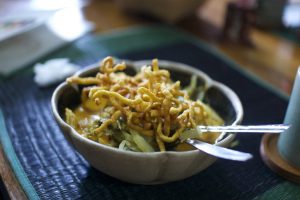 Central Thailand
Containing the former historic capitals of Sukhothai and Ayutthaya, as well as the modern day capital Bangkok, central Thailand is very much the dominant region in Thailand. The rich and diverse history is notable in its food, with its two most famous dishes originating elsewhere.

Khanom Chin
Despite the name suggesting this is a Chinese-inspired dish, its origin are with the Mon people who migrated from Myanmar. Whilst khanom chin is a simple dish of fermented rice noodles, it’s commonly eaten with a spicy, fish-based sauce alongside fried chicken, which is when it really comes alive. 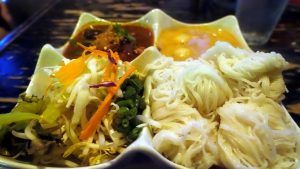 Pad Thai
Despite being Thailand’s national dish, pad Thai arrived during the times of the Ayutthaya kingdom thanks to visiting Chinese traders. The most famous of Thai dishes, it sees rice noodles stir fried amongst tofu, tamarind, fish sauce, palm sugar, garlic and often bean sprouts to create a dish that’s both sweet and sour – and undeniably delicious. 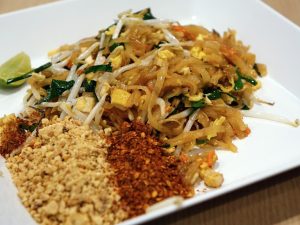 North-Eastern Thailand/Isaan
With no beaches, islands and few drunk foreigners, Isaan is often what many would define as ‘real’ Thailand. A historical region that borders both Cambodia and Laos, Isaan has long been an agricultural hub and its people have their own identity, culture and even language – not to mention some of the spiciest Thai food available.

Som Tam
Also known as papaya salad, som tam is enjoyed all over Thailand but nowhere more than in Isaan. For a simple dish prepared with a pestle and mortar, it has a complex and diverse flavour profile; sour limes, fiery chillies, sweet palm sugar, fish sauce and savoury flavours all combine to produce a dish that’s extremely spicy and delicious. Eaten with fish, crab or other meats, it’s a must try for anyone visiting Thailand, regardless of whether it’s eaten in Isaan or not. 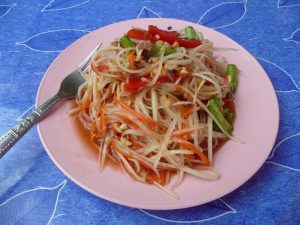 Laab
Enjoyed just as readily in Laos as it is in Thailand, laab is another spicy salad with its origins in the Isaan region. Rice is toasted and grounded to fine pieces, and served mixed with juicy minced meat, and flavoured with lime juice, chilli and fish sauce. 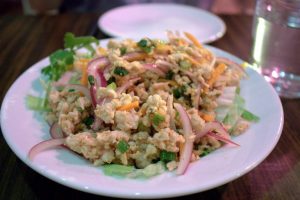 Southern Thailand
Southern Thailand’s proximity to neighbouring Malaysia has seen a distinct Muslim influence take a hold of its cuisine, with fiery curries galore available to travellers daring enough to try them. Though whilst the south is recognised as having exceptionally spicy food, sweeter curries are just as popular.

Gaeng Kua Kling
Kua kling is an extremely spicy yet simple dish, consisting of only two main ingredients – curry paste and meat. The curry paste is produced from chilli, pepper, lemongrass, garlic, turmeric, galangal, salt, and shrimp paste, and is added to the meat and mixed once the meat is roasted thoroughly. A dry curry, the presence of chilli is strong and leaves even the biggest fans of spicy food looking for the nearest glass of milk.

Gaeng Som
Extremely hot and sour, gaeng som is a fiery-orange coloured curry that’s readily enjoyed by people from the south. From a base of shrimp paste, shallots and chillies, it gets its sourness from the presence of tamarind, before palm sugar, drumstick pods and usually fish or shrimp are added to complete the dish. Hot and thin, it’s eaten over rice, which offers some respite from the fiery heat. 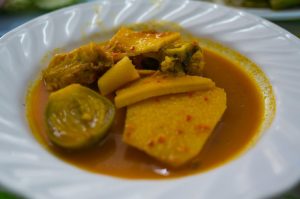 Gaeng Tai Pla
Arguably the spiciest of all Thai foods, this hot, salty curry has a strong umami taste and often proves too hot to travellers who try it. Consisting of fermented fish entrails, fish, bamboo shoot, eggplant and the usual Thai ingredients of shrimp paste, galangal and yardlong beans, despite its strong smell and unappetising appearance, it proves to be a distinctive and delicious dish for those brave enough to try it.